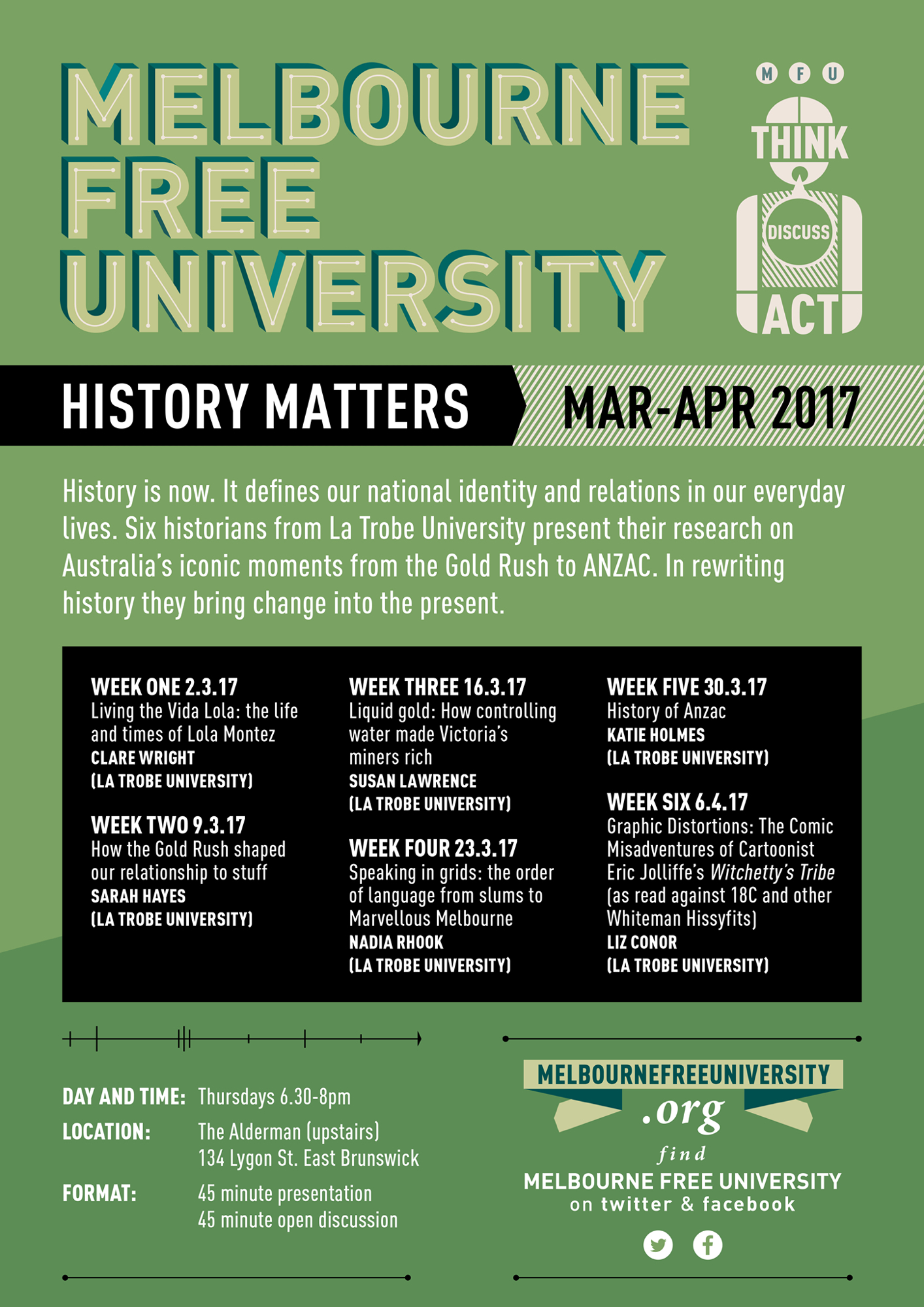 History is now. It defines our national identity and relations in our everyday lives. Six historians from La Trobe University present their research on Australia’s iconic moments from the Gold Rush to ANZAC. In rewriting history they bring change into the present.

1) Lola Montez – virago of the Victorian goldfields, lover and horsewhipper of men, saucy dancer par excellance. These are but some of the ways we have come to know the most infamous woman of the gold rush era. But political advisor to kings? Maverick democrat? Public speaker? Can we add these strings to her flamboyant bow? And if there is more to the story than meets the eye, what might these omissions from the conventional historical narrative have to tell us about nineteenth-century ‘women’s place’ and the colonial era more generally?

2) Why are we are so attached to our stuff? What meaning lies behind the things we buy? This session traces our obsession with things back to the Gold Rush era (1851-1880). The discovery of gold in Victoria brought to Melbourne new wealth, unprecedented access to a global network of consumer goods and great opportunities for social mobility. What people bought served a vital role in carving out their new position and a better life in a new city. Archaeological excavations across Melbourne have uncovered countless objects that residents bought, used and discarded in the Gold Rush era. These objects provide an opportunity to examine the meaning behind consumer choices, and the sometimes strategic purposes they serve. So why did Mayor Smith chose a neo-classical design for his chamber pot? Why did Mrs Bond buy so many absinthe bottles for her brothel? Why did the Maloney siblings have a penchant for Staffordshire figurines? Through archaeology, the meanings behind these choices can be usefully interpreted in order to understand how people use things and why, both in the past and the present.

3) Buying and selling water is worth billions of dollars in every year, but where did this idea come from? Where did we get the idea that people could profit from a natural asset? Abandoned dams and ditches across central Victoria provide a clue. Long before modern water markets gold miners were struggling for control over water. They had fist-fights in the streets, crept out in the middle of the night to steal water from their neighbours, and hauled each other through the courts for a decade. By the time they were finished water was a commodity and the water bosses had made fortunes. They left a legacy of laws that started to show us how to share water and how to protect the environment.

4) We walk through Melbourne's many grids of streets everyday, but have you ever stopped to think about how these grids shape the language/s in which we speak? This lecture explores the spatial order of language in 1890s Melbourne, from the slums of Little Lon to the prestige of Collins Street, and how it this order was made through the colonisation of Kulin land and the politics of Chinese and South Asian migration. Students will gain an understanding of how, and where, English became bound up with Australian identity.

5) When the Australian and NZ Army Corp (ANZAC) troops fought in the First World War, they understood themselves to be fighting for 'King and Country’. Today the service of the original Anzacs is generally portrayed as fighting for a set of values seen to be specifically Australian and which comprise the Anzac ‘spirit’: courage, endurance, initiative, discipline and mateship. This talk will trace the ways our understandings of Anzac have changed over the decades and consider reasons why the Anzac legend has come to hold such a significant place in contemporary Australia.

6) In 1980 cartoonist Eric Jolliffe was the subject of a Federal Anti-Discrimination Board case over a cartoon published in the Permanent Building Association's monthly magazine, Corroboree. The cartoon depicted a voluptuous young woman wearing only a bra on her bottom and was captioned ‘It's a white man's garment she got from the missionary's wife’. Jolliffe’s ‘mates’ had jumped to his defense, including A.P Elkin and Ted Egan, but Jolliffe stopped drawing his Witchetty’s Tribe characters. Jolliffe’s Aboriginal characters were anecdotally enjoyed by Aboriginal as well as white readers in the Northern Territory. Jolliffe claimed to have a photo of an Aboriginal audience at an ‘Aboriginal Olympic Games’ in Arnhem Land admiring and enjoying the same cartoon within an exhibition of his Saltbush Bill and Witchetty’s Tribe cartoons. He had imagined his ‘very accurate’ depictions of tribal living countered the denigrating cartoons of drunken, ragged, fringe-dwellers that featured in the interwar magazines he drew for including The Bulletin, Smith’s Weekly, Pix and The Sun. While his humor worked from the incongruity of traditionally-living people mouthing white platitudes about fashion, parenting and even anthropology, it sometimes pilloried the later rather than the former. This paper will read the defense of Jolliffe’s cartoons against the present 18C debate in order to trace the cultural recurrence of white men’s sense of victimization on being accused of racism.